If you are looking for conference microphone systems (also known as push-to-talk mic, discussion or conferencing systems) and are not sure where to start, you’ve come to the right place. We know this can be a tricky subject, so we’ve put all the necessary information on one page.

The most common applications for conference microphone systems are:

In plain English, conference mic systems are a type of audio equipment that enable meeting participants to hear and be heard by each other.

Imagine a 20-member city council sitting around a table, with an additional 100 audience members watching. With a group of this size, it is impractical to pass a microphone between speakers. It would slow things down to the point of chaos.

That’s where the conference mic system comes in.

In a typical conferencing setup, each participant has a personal (gooseneck style) microphone unit. This  lets them speak to the other attendees and listen to others through a small speaker. The chairman of the meeting has a special unit with controls for volume, mute (to recognize speakers or cut off those whose time has expired), voting features, and so on.

The ultimate goal of conference microphone systems is to bring the efficiency of a small meeting to a larger setting.

Why You Need A Conference Microphone System For Your Meetings

Accessibility: Makes it easy for a wider group of speakers to participate in the meeting and allows a larger audience to follow the proceedings (either as passive listeners or after the fact via recordings).

Saves Meeting Time: Eliminates the need for speakers to constantly trade microphones, as each speaker has a personal mic. This stops needless time wasted fumbling with microphones between speakers, (or awkwardly trying to get a mic back from a speaker who has gone on too long). It is always clear who is speaking because each microphone has a light that illuminates when on.

Enables Language Interpretation: With multi-lingual groups, conference microphone systems are often used with simultaneous interpretation equipment. The individual mics allow the floor feed to be sent directly to the interpreter, so that he/she has a clear audio signal to translate.

Improves Meeting Flow: The system’s mute, volume and voting controls allow the Chairman to discreetly control the meeting, recognize participants, and call to order as necessary.

Aesthetics: The sleek and polished appearance of the systems signals professionalism and respect for all participants. By giving each speaker a personal microphone, it also shows a commitment to valuing each person’s voice.

A few pieces of lingo are essential to understanding these systems: 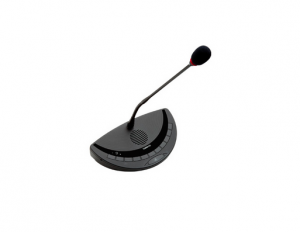 This is the person running the meeting. He/she can recognize speakers,alert them when their time is up, and organize voting. For this reason, the chairman has a special mic called the Chairman Unit with  additional features like muting speaker priority to direct the discussion. These push-button features are simple to use and help the speakers focus on working with the group.

Delegate / Delegate Unit: Refers to all other participants in the meeting who are not the chairman. The delegates each have their own microphone, called a Delegate Unit. These units typically have a push-to-talk button, volume control, voting buttons (optional), and a light that illuminates when the mic is live.

Central Control Unit (CCU): This is the central piece of equipment that controls (and powers, if wired) all the individual microphone units. It also mixes the mic feeds, distributes target language feeds, and powers the voting functionality. Some central units also feature built-in recording capability.

Floor Language: The main language spoken by participants at a given time.

Target Language(s): The language in which each delegate hears the speech. It can also be called the translation feed. When the audience is diverse enough to need multiple target languages, this can be provided through multiple interpreters using the same system. The rest of the interpreting process remains exactly the same.

Simultaneous Interpretation: A type of translation where the interpreter listens to the floor feed through headphones while translating orally to the target language in real time. This is a highly demanding job. The interpreter must listen, mentally translate, and speak their translation all at once, with no time to check outside resources. For more information, see our resource page on translation equipment.

Factors to Consider when Purchasing a Conference Microphone System

Ease Of Use: These systems aim to increase the efficiency of your meeting so the equipment must be easy for participants to use. No use investing in the equipment if participants can’t use it! So it is critical for the controls (volume, push to talk, on/off light) to be instantly understood by users.

Venue: Your event location will determine if you need a wired or wireless system.  If you are using infrared interpretation gear, it’s also important to maintain a line of sight between the transmitter and the receiver, as IR signals cannot penetrate walls. Other audio equipment (eg recording equipment) that you are using on site can also play a role in this decision.

Advanced Features: Conference Microphone systems are becoming more advanced with special features, so consider whether you will need:

The Two Types of Conference Microphone Systems: Wired and Wireless

We partner with Listen Technologies to offer the highest quality systems on the market. The systems we offer come in two flavors: wireless and wired. Here’s an overview of the two systems:

Setup, Operation and Maintenance
The system is extremely easy to set up and use. A digital CAT5 cable carries signals between the CCU and the mic units. Delegates press a button to begin speaking, and a light appears for the chairman and the delegate to show the delegate’s desired to talk. Chairman Unit includes a button to allow discussion, granting permission for a delegate to speak to the group. Ongoing maintenance of devices is minimal; and they are simple to clean. 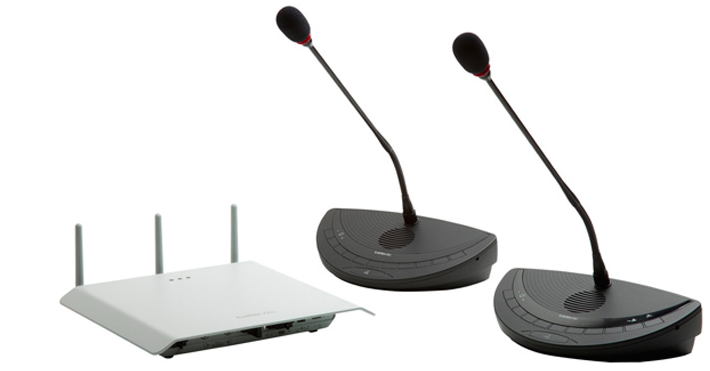 The wireless conference mic system eliminates the need for complex mixers, sound systems, and cables.  Simply ensure that the delegate and chairman units are charged (approx. 90 minutes) and power up the CCU to begin operation. Devices have feedback reduction technology that simplifies on-site operation.

Listen Technologies: TEHQ is an authorized dealer for this leading global supplier of professional audio equipment. Visit their website for full details on their product line, technical specs, and service offerings.

Audio Technica’s Mic Selection Guide: A useful guide to the different types of microphone (eg condenser, unidirectional, etc) and the pros and cons of each.

If any other questions arise that are not addressed here, or want to discuss a custom package to meet your organization’s needs please call me toll free at:

Hi – I’m Will and I started this company to help you find the best simultaneous translation / interpretation equipment for your organization.

If you need a sales quote, are looking for an audio product you don’t see on the site, or have any other questions just drop me a line.

I usually respond within 30 minutes during business hours (EST).

Note: All equipment we sell is for interpretation using a LIVE human interpreter/translator. There is nothing that I know of that exists now that is able to produce a good quality audio translation without a human interpreter.